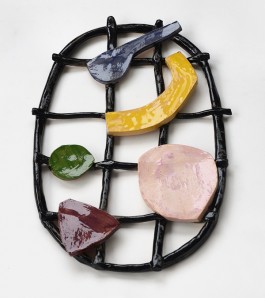 The work of Alex Strachan draws upon traditional motifs of the painterly ‘still-life’ and domestic scenes through an approach to sculpture that Strachan likens to drawing in space. Elements of the everyday are reworked, taking on tangibly familiar forms. There is a candid playfulness in her work wherein its materiality is emphasized, allowing her objects to act as both illustrations of things and make evident the means by which the objects are themselves made. Pieces are staged theatrically through installation presenting a dialogue between substance and image. Visceral media such as clay and paint are boldly employed alongside more quotidian and accessible materials such as wood to demonstrate the construction of the work whilst simultaneously questioning the artifice of sculpture. Colour is used to define the face of the compositions, whilst behind the sculptures are left unadorned revealing their structure.

Accidental relationships found in between work-in-progress and surplus materials in the artist's’ studio inspire the sculptures. This dialogue is recreated when Strachan’s works are displayed by the way in which they are grouped and installed. Influences such as the studio paintings of Matisse and the domestic spaces painted by Bonnard are combined with the humour of Franz West’s sculptures and the Omega Workshop’s abstract ceramics, furniture and textiles.

Each of Strachan’s sculptural works attempts to capture the act of making and indeed an essential part of this is formed by the enjoyment in experimenting and engaging with materials, which imbues each piece with an approachable manner. Through doing so, Strachan decisively positions her sculptural works apart from the monumental traditions of sculpture, instead presenting us with objects that invite us to remember the pleasures of making and doing.

The work draws on the superficiality of sculpture, evidencing its substance though heightening the visceral. What results is a physical layering which describes, through its appearance, the crafting of the work whilst simultaneously questioning it through the exaggeration of its implied making. Process is brought to the surface with a subtlety that allows the object to function simultaneously as both substance and image.