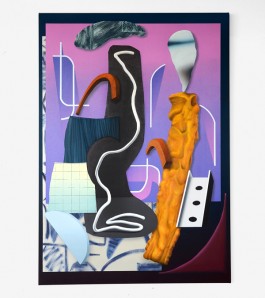 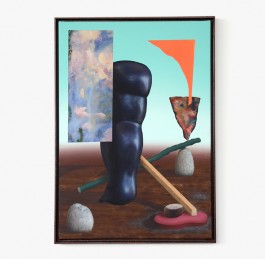 If the Walls Could Talk, Alice Black Gallery, London, 2018;

The paintings of Lee Marshall present explorations into the depiction of space, form, surface texture and volume within the two-dimensional plane of the canvas. Likening a painting more to a screen than a ‘window on the world’, Marshall uses this medium to convey playful compositions, usually realised spontaneously in the initial drawings or collages that act as the starting point for his work.

The processes found within image editing or 3d modelling software and the aesthetic of computer generated imagery influence the paintings as much as the rich language and history of painting itself, though the tropes of past painterly movements can still be glimpsed as they are frequently sampled and transformed during the construction of Marshall’s compositions. The logic of Photoshop, with its layers, cut-copy-paste actions and selective masking and editing of imagery is at the forefront of the artist’s mind when making the paintings, yet this methodology for digital visualisation is given tangibility and physical presence in the application of paint to canvas.

Through this approach the resulting paintings depict received and invented forms, drawn from what Marshall refers to as a “visual vocabulary”, which have already been filtered and transformed through the memory, nostalgia and imagination of the artist before being layered and juxtaposed within the virtual space of the picture plane.

When sampling imagery, Marshall looks for distinct indicators of materiality and creative endeavour, often gathering fragments of imagery from art publications and design magazines to later utilise them within his compositions. By reconfiguring snippets of sculptural or architectural details alongside fragments of reproduced paintings, Marshall is proposing methods of “constructing” paintings and presenting the act of painting as an engineered and considered process whilst reminding the viewer of the artifice involved. The sculptural imagery, often depicting raw materials such as stone, wood, metal or viscous paint, are employed to build an underlying structure within each of his paintings, that he then can respond to by introducing further elements or altering existing ones. This structure can also refer a set of rules, such as a pattern or recurring motif within each painting. Within the initial developmental stages of each painting, Marshall finds enjoyment in upsetting the balance within his work by obscuring certain elements, or juxtaposing images with varying aesthetic qualities. By doing so, he pursues moments of surprise from unexpected combinations of imagery that are more commonly found in traditional collage techniques.

With an attraction to processes of collage, sampling and remixing, alongside the illusory spaces and forms seen within his paintings, it is clear Marshall’s work has been influenced by early 20th Century artistic movements such as Surrealism or Cubism. But alongside the more familiar painterly influences, his paintings have been informed by contemporary methods of image creation and distribution such as Google image searches, high definition computer generated imagery and image manipulation apps. At times, these contemporary influences are visually evident within Marshall’s paintings, for example as clean edged “3D” shapes, yet it is also present in his non-hierarchical treatment of images, which are cut-up, rearranged and combined in order to generate new results. When working, Marshall seeks the point at which a painting achieves its own “pictorial logic”, resulting from the space where imagery is freed from its original context and becomes as malleable as the paint in which it is rendered.