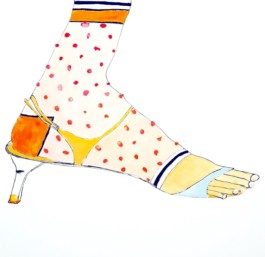 Sandra Lane completed an MFA in Sculpture at the Slade School of Art and a BA in Fine Art Drawing at Camberwell College of Art, London.

In 2017 she was awarded the Sidney Nolan Trust Residency, and the Acme Studio Award in 2013.

If You Can't Stand the Heat, Roaming Projects, London, 2018

Sandra Lane looks for vulnerability and absurdity in simple shapes. The objects she creates are often the result of what a particular material can be made to do, such as a puddle of liquid set firm; but also taken to their limits until they teeter or crumble. She is fascinated in the shifting viewpoints of changes of gravity and scale, influenced by the work of Franz West and Rose Wylie.

She began making shoes from clay in response to thoughts about her younger self. The Walking Shoes are from a memory of the impractical shoes she would wear to walk through the countryside. This led to an exploration of femininity, self-image and identity in her work. Where does identity lie? Is it in one´s choice of big yellow shoes or in the particular shade of lipstick one wears? Does being a natural blonde automatically confer goodness or authenticity? The Walking Shoes are informed by the absurdity of such reflections, and create a subversive undermining of symbols of femininity.